How the Onan Observatory Came About 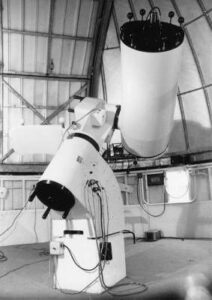 Telescope as installed in Duluth, ca. 1980. Photo Credit: A. Ominsky

In 1973, a group of amateur astronomers originally associated with the 3M Astronomical Society formed the Twin Cities Astronomy Club. As the club grew and its public outreach activities flourished, its members realized the Twin Cities would benefit greatly from a public observatory.

In preparation for the task of soliciting the necessary donations, the club sought and obtained 501 (c) 3 nonprofit status in 1976. Through its involvement with programs at the University of Minnesota, the club learned that the astronomy program at the Duluth campus wished to dispose of its primary instrument, a Group 128, 16″ Cassegrain telescope.

A Ms. Larson, aunt of a member, loaned the club the bulk of $6,500 needed to purchase the telescope and in May 1980 a group removed the telescope from its Duluth location and transported it to the Twin Cities. (In recognition of Ms. Larson’s support, the club officially designated the telescope as the “Larson Telescope”, a name which it bears to this day.) The club disassembled the 1,000 lb. telescope and moved it to storage sites in Burnsville and Forest Lake Minnesota.

Realizing its unique position of providing an astronomical organization for all of Minnesota and not just the Twin Cities, the club changed its name to the Minnesota Astronomical Society in September of 1980.

Cover of the 1990 proposal, showing original design of observatory.

In 1987, after a 12 month selection process which considered nine public and private locations around the Twin Cities, the Society selected Baylor Regional Park, near Norwood-Young America, as the preferred site for the observatory.  During the following year, the members of the Society’s Observatory Committee navigated the long, arduous process needed to gain approval for construction at Baylor.  The first major step was to amend the Baylor Park Master Plan to include an observatory.  This amendment subsequently required approval by the Carver County Park Commission, the Carver County Board, the Metropolitan Parks and Open Space Commission and the Metropolitan Council.  Additionally, the park’s Conditional Use Permit was amended to add the observatory as a park use.  The Carver County Planning Commission and the Carver County board subsequently approved this change.  Finally, the MAS and the County drafted a 20 year lease covering the use of Baylor Regional Park as the site for a public observatory.  Representatives of the Society signed the lease on September 21, 1988 and the Carver County Board of Commissioners unanimously approved the lease on November 8,  1988. 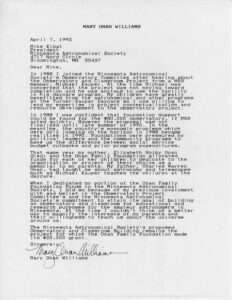 Letter from Mary Williams, describing her intent for the $20,000 grant.

Over the next several years, the Society worked to design the planned observatory. Finally, in 1990, plans were sufficiently complete to support the first construction fund-raising effort and in 1990 and 1991 the Society contacted 175 potential funding organizations. Preliminary estimates suggested construction costs for the planned observatory would range from $75,000 to $80,000, with an additional $31,000 required for equipment. After months of fund-raising only one organization — the Onan Family Foundation — responded favorably, providing the Society with a $20,000 grant to begin constructing the observatory.After the relationship with Wilder ended, the Society recommitted to constructing an observatory at Baylor Regional Park. In 1993, the Society developed a new, scaled down design for the observatory, thought to be more achievable given the then-current state of financial affairs. This design became known as the “shed on a hill” approach, because of its simpler, almost Spartan approach to housing the telescope. 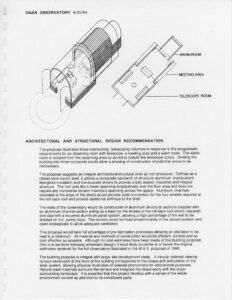 In 1994, the Society engaged the architectural firm LOOM to review the proposed design and evaluate it. The review identified a number of flaws and shortcomings. As an alternative to the “shed on a hill” observatory, LOOM proposed a unique roll-off roof design which became known as the “three short-barreled shells” design. Through the remainder of 1994 and into 1995, LOOM refined the design. The membership of the Society and the Carver County Parks Commission both approved the conceptual design.Progress on the observatory inched along through 1996 and 1997, as the Society’s attention and energies turned toward sharing with the public the two great comets of those years — Hyakutake and Hale-Bopp. In total, well over 1,500 people joined the MAS at several public viewing events. Interest in astronomy was high and the Society’s membership — and commitment to the observatory project — benefited greatly. Late in 1996, a small group of Society members formed the “OTC Committee” with the sole purpose of either getting the observatory constructed, or, pushing the telescope “Over The Cliff” (hence the committee’s acronym).1997 saw a renewed focus and energy applied to the project. The OTC Committee solicited and received approval to proceed with the LOOM design from the Executive Board and membership of the MAS, as well as from the Carver County Parks Commission and the Carver County Board. The MAS Executive Board allocated money from the original 1991 Onan Family Foundation funds and construction of the observatory was finally underway. 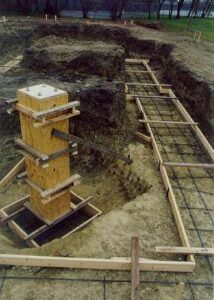 Forms for the telescope pier and foundation footing, ready for concrete late in 1997

The two months of September and October, 1997, saw more real progress toward observatory construction than any two prior years combined.  In this short period of time, the OTC Committee:

October and November were no less busy.  Dozens of MAS members showed up weekend after weekend, striving to complete the retaining wall ringing the observatory’s 40′ diameter terrace before winter set in.  The instructor and students from Hennepin Technical completed pouring of the  foundation and telescope pier, and began the task of constructing the concrete block walls of the observatory.

Site at the close of the 1997 construction season.

The members of the MAS finished the retaining wall late in November, just as snow was about to fly.  Working under a dome of plastic sheeting, the Hennepin Technical volunteers worked under quasi-heated conditions and completed the walls in December.  The final major accomplishment of 1997 was to relocate the +1,000 lb. telescope mount from storage to the work space where renovation would take place in the months ahead.The focus of the first few months of 1998 was fund-raising.  MAS members and companies such as 3M and Zeiss IMT combined to exceed the original $10,000 fund-raising target, by contributing over $15,000! 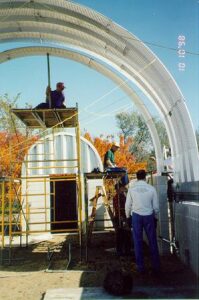 The start of the 1998 construction season presented the Society with its most formidable physical challenges to date.   During this time 170 cubic yards of clay was moved onto the site and used to backfill the foundation and surrounding landscape.  Construction of the roof roll-off mechanism followed, requiring fabrication of 14 mounting brackets and wheels, installed along a 50 foot span in perfect alignment.  And then, attention turned to the construction of the roof itself.  Hundreds of prefabricated pieces, totaling over 2,000 pounds, were assembled by volunteers of the MAS, with many of the arches requiring assembly at a height of 19 feet above ground.  The final major construction activity for 1998, was the installation of electrical service to the site. 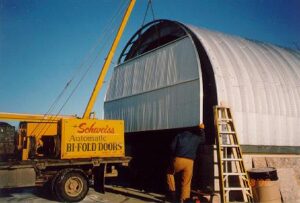 1999 saw the completion of two major milestones — the pouring of the observatory floor and the installation of the large door located in the end of the movable roof section, enabling the unobstructed motion of the roof across the observing floor.  Inside the building, the concrete floor was finished and sealed, and the final electrical wiring installed.  Doors were installed throughout the building and the refurbished mount for the telescope was installed on the pier.

Major construction progress continued in 2000.  The temporary enclosures at the ends of the buildings were replaced with translucent panels, allowing outside light into the observatory during daylight hours.  Installation of florescent lighting provided nighttime illumination of the building’s interior.In April, the refigured optics and tube assembly of the Larson Telescope were reassembled and mounted on the observatory’s pier.  By the end of the year, the telescope was fully operational, including the addition of a state-of-the art electrical focuser, a top-of-the-line finder scope and electronically-driven stepper motors to drive the telescope.  This major milestone marked the end of a 20 year journey for the telescope that began when it was first moved from the University of Minnesota, Duluth.The ongoing struggles with the motion of the roll-off roof were finally resolved by reengineering supporting brackets, thereby strengthening them and by replacing the rolling wheels with non-deforming steel wheels.  At the public event of June 24th, the observatory roof successfully rolled back for the first time since the Larson Telescope arrived on site.Financial support for the observatory continued through the year.  In addition to substantial contributions of time and money by members of the Minnesota Astronomical Society, the Onan Family Foundation continued their generous support with a grant of $10,000. 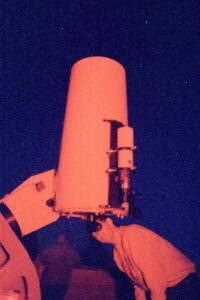 The inaugural season of public programs opened April 28th, 2000 with over 100 visitors in attendance.  Public programs and small-group educational programs continued throughout the summer and fall, serving hundreds of Twin City’s residents.

Though much remained to be done, the Minnesota Astronomical Society’s Onan Observatory at Baylor Regional Park was finally up and running! 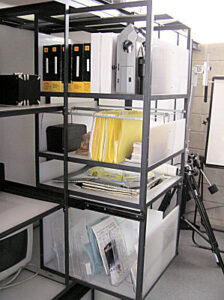 In the years the followed, many improvements took place at the observatory.Custom-fabricated cabinets and a pull-out library unit were added in 2001.  The MAS also hosted a star party for members of the Astronomical Society of the Pacific who were in Minnesota for a convention and welcomed almost 350 visitors at its Leonid meteor shower event.2002 saw the construction and installation of portable benches that double as additional storage.Most of 2003 activities at the observatory centered on general maintenance and repair, and keeping pace with the nearly 2,000 visitors, a number largely driven by all the ‘press’ the close opposition of Mars generated that year.

In 2004, manual opening and closing of the observatory roof was eliminated by adding a winch-driven roof mechanism. (NOTE: this improvement was short-lived as the stress of opening the roof led to the block wall breaking.) Shielded lights we added to several park buildings to eliminate glare at the observatory. The observatory also received two equipment donations during the year — a CCD imaging system, and a Coronado H-Alpha solar telescope. Giant 15×80 binoculars were also added to the inventory this year.
As we enter 2005, renovation and improvement of the Larson telescope continued with improvements to its primary mirror cell and changes to the tube to reduce the amount of light potentially impinging on the primary mirror and secondary mirror cell and supports. The observatory also took possession of its latest donation — a Takahshi TOA-130 refractor on a Temma 2 NJP mount. Plans for the year include beginning installation of the long-planned benchwork around the terrace, and construction of a paved path leading from a proposed handicap accessible parking space up to the observatory entrance.

A decade later, the HotSpot Classroom and the Sylvia Casby Observatory were added and the entire facility was renamed Eagle Lake Observatory.  Detailed history will be poster here soon.

Do you have additional information regarding the history of the observatory or an interesting anecdote? Please share them with the MAS Board.